In 1984 Ralph Parsons founded Parsons Engineering in Brentwood, TN. Forgoing the traditional document production method by drafters; he built a team of highly qualified engineers and designers. Utilizing engineers to design and draft, the documents are completed faster and cleaner. In 2000 Parsons Engineering incorporated. We continue to provide the same level of service which turned a small company into one of the largest electrical-only consulting engineering firms in the Nashville area. Our team consists of two licensed principles, one licensed engineer, two engineers in training, and four degreed designers.

Tony, as most folks know him, has been with us since 1996 and is currently the President or as some of us address him, El Presidente. It’s not uncommon to see a line forming outside his office with eager employees waiting to have questions answered and assignments given. Tony is the Jedi Master of consulting engineering. Once he leaves the office he is known by his four padawans as Daddy. At home he uses Jedi mind tricks to convince the young padawans to pick up their toys, brush their teeth, and stop throwing things in the house.

SOMETHING I SAY TOO MUCH: No problem

FAVORITE PLACE TO BE OTHER THAN WORK: On the water 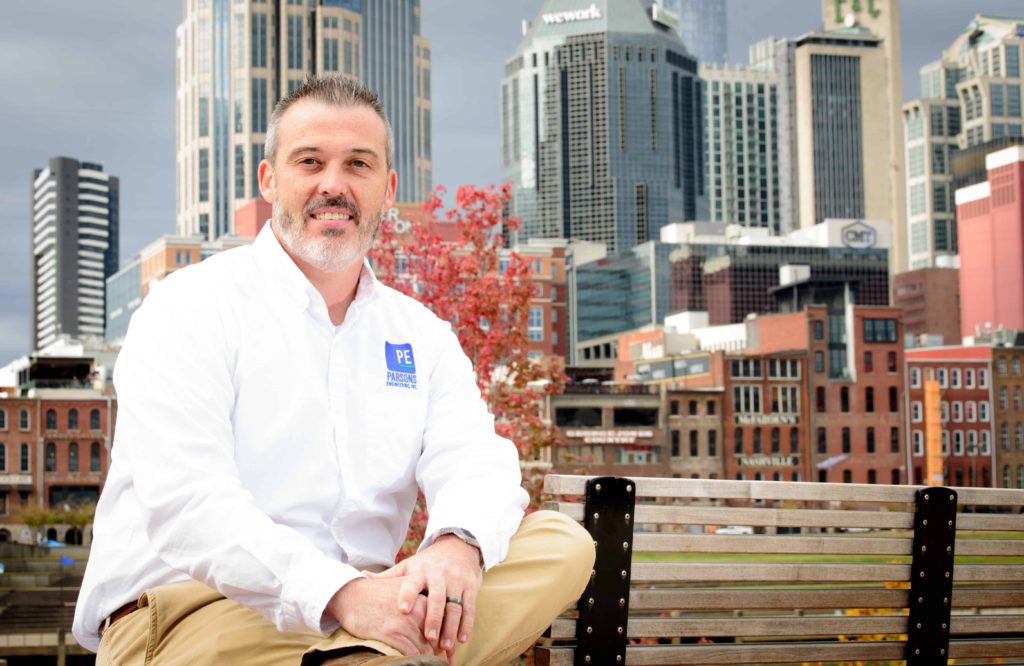 Rodney joined the crew in 1999 after obtaining his degree from TN Tech and has been working hard ever since. Rodney is a husband to a wonderful wife and a father to three awesome kids (a teenage son and twin teenage daughters). With three teenagers, there is never a lack of excitement or drama around the house. Rodney is an avid hunter and fisherman. When he’s not in the office, he enjoys spending time with his family in the woods and on the lake.

FAVORITE QUOTE 1: “Two things are infinite: the universe and human stupidity; and I’m not sure about the universe.” – Albert Einstein

FAVORITE QUOTE 2: “You can design and create, and build the most wonderful place in the world. But it takes people to make the dream a reality.” – Walt Disney

SOMETHING I SAY TOO MUCH: Who’s using the WIFI?

FAVORITE PLACE TO BE OTHER THAN WORK: With my wife and children on the lake.

In 2002 Jonathan decided it was time for a change. He traded-in an exciting, action packed career in the grocery business for a seat of AutoCad and a mouse and never looked back. When Jonathan isn’t designing electrical systems or fighting computer gremlins, he can be found spending time with his wife and two boys watching the VOLS.

FAVORITE PASTIME: Spending time with family and watching the VOLS.

FAVORITE PLACE TO BE OTHER THAN WORK: With family and Neyland Stadium

FAVORITE QUOTE: Just remember, wherever you go, there you are. And you will never be lost.

FAVORITE MOVIE: Anything with Bruce Campbell

Savanna jumped in with both feet in 2012. She has since made the move to a part time Parsons Engineering Designer so she could work from home to be with her two precious kiddos. She has a passion for making time for work and being a homemaker for her husband and kids.

FAVORITE PLACE TO BE OTHER THAN WORK: With my little family

FAVORITE QUOTE: "Pray for yesterday, live for today, and hope for tomorrow." – unknown

SOMETHING I SAY TOO MUCH: Mercy!

Sarah joined the pack in 2012 and is swiftly becoming the 3D cad master. Sarah enjoys hunting and shooting and is able to hone some of those skills while at the office. She practices her hunter’s observation skills on the flow of people past her desk to determine the shortest wait time outside EL Presidente’s office and patience when someone sneaks ahead of her before she can get to his door.

DEGREES & SCHOOLS: Bachelors of Fine Arts and Masters of Architecture from Savannah College of Art and Design

SOMETHING I SAY TOO MUCH: What was I about to do/say?

FAVORITE PLACE TO BE OTHER THAN WORK: In the woods or duck hunting in Arkansas

FAVORITE MOVIE: Ghosts in the Darkness

Lori joined the group as Business Manager in 2009 after spending the previous seven years managing El Presidente and her four monkeys full time on the home front. When she is not managing business matters she can still be found managing the monkeys. She enjoys spending time with El Presidente, traveling, camping with the family, and dark chocolate (we cannot forget the dark chocolate!).

FAVORITE QUOTE: "Cleaning your house while your kids are still growing is like shoveling the walk before it stops snowing." – Phyllis Diller

SOMETHING I SAY TOO MUCH: Did you brush your teeth?

Tom joined Parsons in 2015 and easily took over the oldest employee position. Parsons has been able to teach this old dog some new tricks but he still has a few of his own up his sleeve. Tom enjoys history, debating politics, watching sports and doing DIY home projects.

FAVORITE PLACE TO BE OTHER THAN WORK: Home

FAVORITE BOOK/AUTHOR: The Bible by God

FAVORITE MOVIE: I know it’s not a movie but Game of Thrones comes to mind